Remember when Downtown Sunnyvale, CA had just one street with a few ok stores and nowhere that exciting to go eat or grab a few drinks?

That wasn’t even that long ago. I remember going to get my hair done on Murphy Avenue and leave right after because there was really not much to do out there. OK, there were a few bars, but nothing like what it has to offer now. It’s become a destination for people who live all around Silicon Valley. I could have picked any of the taprooms in downtown, but I went for the one that has my heart (probably shooting myself in the foot in the process, but hey, I’m just being honest).

So where’s that? TAP’T, of course! If I ever called a bar my neighborhood bar, it would be this taproom. They treat the beer well, have a great rotating selection, have awesome food to pair with the beer… What more can you ask for?

I sat down with owner Regina Chan, 31, who gave me a rundown of the place. As you may know if you are a local, Tap’t is located right behind The Prolific Oven and next to NOM Burger. And yes, all three businesses are connected and owned by the same person. Well, not exactly but close… Regina’s parents own The Prolific Oven (Regina being the manager) and Regina owns the other two. You can call that a success story, right? At least in my book. They didn’t all open at the same time. The Prolific Oven, the fifth of its kind and the third of the remaining three, just celebrated its fourth anniversary. NOM Burger has been open for about three and half years and Tap’t opened its doors about one and half year ago.

“When NOM Burger opened, I knew nothing about craft beer,” Regina said. “I knew I wanted to make the best burgers in the Bay Area and have really good craft beer.” After all, what’s better than craft beer and burgers in the same place? No, I mean… really… Regina learned the ropes very quickly and started buying from DBI Beverage. (She now does business with a lot more distributors and even works directly with some of the breweries.)

“People are really willing to help each other out [in the craft beer community], but you have to get in,” Regina said. “But people are very friendly and what I like is that it doesn’t matter where you came from, what ethnicity you are, what age you are or what gender you are.”

Regina pointed out that the craft beer scene was a lot different when she first started. They were serving brews by Saint Archer and the likes back then. They still do but have also expanded their offering tremendously over the years.

So how did we go from a burger place to a bakery… to a taproom? Take a deep breath and bear with me for a bit. Regina and her family quickly realized that the bakery side was actually way too big to stand on its own. Concurrently, Regina was finding herself refusing to carry some of the brews she wanted to feature at NOM… “We were overwhelmed with the amount of beer we could purchase, but we only had 12 taps,” she said. See what’s brewing here? Yup! That’s how Tap’t was born! You still walk through the bakery to get to Tap’t, but they are now two separate businesses sharing the original bakery space. 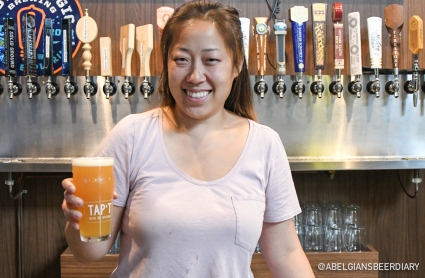 Tap’t boasts 24 taps and carries some of the best beer from around California and beyond. They usually have something from the big craft guys such as Fieldwork, Barebottle and Modern Times, along with some rarer options from local nano/micro-breweries such as Clandestine Brewing, Lazy Duck or Mraz Brewing. You may want to consider joining their Tap’t Society and save every time you drink! They also organize a members-only monthly bottle share where they invite people to bring beer and share it with others. Regina said it’s a great way to learn more about breweries and beer you’ve never tried before. (Details available in the taproom.)

Regina said they are not currently planning on expanding to other locations but rather focusing their energy on making Tap’t even better. One of the things they are discussing is trying to arrange their space to be able to carry more cans and bottles and expand their to-go business. I asked if she had ever considered making her own beer and she said she doesn’t feel she would be good at it. Don’t shoot it down until you try it, Regina! You never know… She grew up in Cupertino and went on to study journalism at NYU When she came back from New York, Regina started helping in the family business but eventually wanted to have a business of her own. The bottom line is: do what you love and believe in! “Our careers are so much of our lives,” she said. “We have to enjoy doing what we do.”

So, Regina, what’s your favorite beer? That’s probably the hardest question to ask anyone in the craft beer industry. When you ask a brewer, it’s like asking who is his/her favorite child. When you ask a taproom manager… well, there are just way too many to choose from. But Regina narrowed it down to one that she is currently really enjoying (until it switches over to the next best thing). The winner is Mraz’s Capitol Luau American Sour. You know what? I can’t blame her. I love that one too! And hey, while we are at it, what’s your fave burger at NOM Burger, Regina? Dateggdoe, an all-natural beef patty, pancetta, garlic aioli and a crispy, cheesy egg topped with bacon, green onions, pickled jalapeños and sriracha mayo. That sounds delish! I personally have tried their NOM Burger…burger, an all-natural beef patty, gruyere, caramelized red onions, butter lettuce and roasted tomato aioli with optional candied bacon. All I’m going to say is get that bacon. It was to die for! Did I mention they make their own buns from scratch twice a day? Yeah… remember, they also own the bakery…

Thirsty and hungry yet? I know I am! 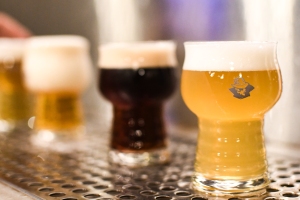