When Santa Clara Valley Brewing Brewmaster Steve Donohue makes a beer that’s a little more out there, people catch it and say “That’s not a Steve beer.”

That’s not to say that Steve can’t make beers that fall more in line with the current beer fads, but Steve has mastered the art of brewing really good basics such as Hefeweizens, West Coast IPAs, Imperial Reds, etc. and tends to stick to making these. I didn’t get to meet Steve because even brewers take vacations sometimes (I know… crazy!), but I sat down with General Manager Brian Moore aka BMo.

Santa Clara Valley Brewing opened its doors almost exactly 4 years ago in June of 2015. They had been contract brewing out of a local brewery for about 3 years before that, but in 2015 it was time for them to have their own space. Steve, Tom Clark and his wife Colleen Clark set out to open a brewery and started working on branding, operations, etc. You know the drill. There is so much that goes into opening up a business and breweries are certainly no exception to that. Steve brought with him 12 years of brewing experience and had won several medals at the national level. He was also not tied to a particular brewery at the time, and it was perfect timing for the team to meet. “Eight to 10 years ago, Tom was upset that the San Jose beer scene was so poor, San Jose being one of the biggest cities in the country.”

They started small(er) and have expanded their brewing capacity about 50% since they first opened (and are slowly running out of space). They produced about 1,200 barrels last year and are on pace to make about 1,600 barrels this year. They also contract brew for New World Ales, another great local brewery. Santa Clara Valley employs five taproom staff, assistant brewer Bill and two sales managers. Co-owner Coleen takes care of the books, Co-owner Tom assumes more a CEO position and Co-owner and Brewmaster Steve, you know it already, brews. What about BMo in all that? Well, he is like most brewery general managers, he does everything else. He is involved in marketing, sales and oversees the taproom. BMo started at Santa Clara Valley Brewing in January of 2018 and seemed to have collected the perfect bouquet of skills over the years to become the brewery’s general manager. He had been in the beer business for 10 years, working as a buyer at a restaurant then at Spread and finally Fort Point Beer Co. as the South Bay sales representative. “Beer grabbed me by surprise,” he said. Doesn’t it always? Ha!

When I met with BMo, 35, he spoke very highly of Santa Clara Valley Brewing’s beer and for a good reason. I was impressed with Steve’s craft and I have to say it’s refreshing to visit a place that focuses on the basics as much as they do. You know I love hazies, sours, white stouts, etc., but they seem to be everywhere these days. “Everyone tries to be so nuts, but I like that we make simple, approachable, classic styles that are true to style,” BMo said. It would be hard to talk about Santa Clara Valley Brewing without mentioning their flagship brew, Electric Tower IPA. That beer alone makes up 70% of their annual sales mostly through distribution. Look them up next time you do your grocery shopping; Electric Tower is everywhere! “I don’t know that there is a better West Coast IPA made in the South Bay, and I’d love for somebody to prove me wrong,” BMo said.

BMo poured me a selection of their current brews (see photo) and I have a few favorites. The Chocolate Milk Stout on Nitro is absolutely divine but is not a “Steve beer.” This brew should be available through the summer but is not part of their regular tap list, so make sure to grab one before it’s all gone! New Almaden Red is a close second. I’m usually a fan of the California Reds, but this one is hard not to like with its crazy malty and hoppy profile. “It’s highly underestimated as a summer beer,” BMo said. He said it pairs perfectly with grilled meat, and I have to agree! I’ll let you try the rest of their tap list on your next visit to the taproom…

What’s next for Santa Clara Valley Brewing? BMo said they are in the process of working out some collaboration brews with local breweries. Nothing set in stone just yet, but it’s definitely coming. They are releasing a collab brew on July 20 with San Diego’s Latchkey Brewing called the Coast Is Clear, a juicy IPA. What’s that? A clear hazy IPA. I love the name. It’s just so fitting! They’ll have a food pop-up for the occasion and this release will serve as their Silicon Valley Beer Week kickoff event. Love it!

Other than that, they have been on a mission to modernize their beer names and graphics without moving away from paying homage to the local landmarks and culture. They are also slowly adding the iconic electric tower to all of their material. Nice touch!

I should also mention that Santa Clara Valley Brewing is home to some of the best brewery comedy shows in the area, featuring two types of shows. BMo is very invested in the comedy community and is himself an aspiring local comic. He hosts the feature show, which takes place about every 6 to 8 weeks and features bigger and bigger names in comedy such as Ian Edwards. Ian will be performing at the brewery on July 13. “We get some pretty big names in comedy. The comics love the set-up, and I think we’ll continue to see names like this at future shows,” BMo said. The second type of show is an improv/prepared material hybrid called Pick Your Poison and is run as a competition. It is co-produced by BMo and Ruben Escobedo III, who also hosts the show. The winners then have an opportunity to secure their spot on the brewery’s feature shows. Looking forward to it! 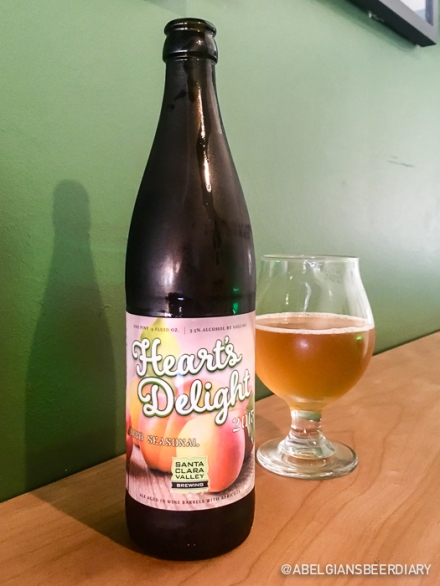 Heart’s Delight: a 2015 barrel-aged ale aged in wine barrels with apricots. Is that a “Steve beer”?

One thought on “Really really good basics… (and beyond)”