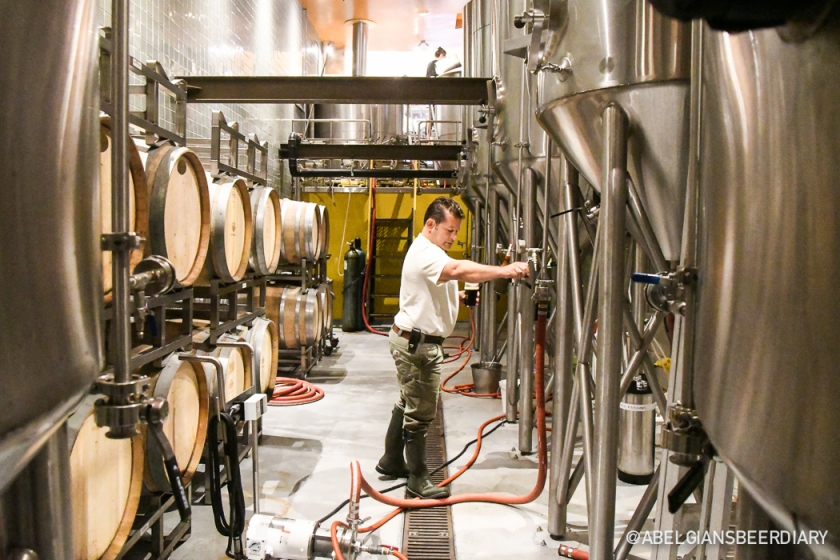 Yup! ThirstyBear Organic Brewery‘s got your back… in more ways than one.

I went there by myself a few months ago. I had checked out pretty much all the other breweries in SF and was dreading the whole traffic situation downtown. It was time I’d put my big-girl pants on and tackled the traffic head on. It wasn’t even that bad…. but as a former San Franciscan, I am a little scarred. Anyway, I had a flight with all nine of their then-current beers and spotted a flyer for a flamenco night. My girlfriend and my roommate were into it so we went back as a group in May. I think I liked their beer even more in May than I did the previous time, so I had to feature them on my website. I met with Brewmaster Brenden Dobel and got the lowdown on the brewery for you so you don’t have to. What you HAVE TO do is go there on a flamenco evening (1st Sunday of every month) and check out the tapas-style food, organic craft beer and flamenco moves!

So where did Brenden get his start in brewing? Well… Brenden was born in San Francisco and grew up in Europe. “I drank good beer even at age 12 and wondered why American beer was so shitty,” Brenden said. He eventually moved back to the United States and attended college where he earned a Bachelor’s in Western Philosophy. I know what you are thinking. What’s a guy who has a philosophy degree doing in a brewhouse? Let’s just say that over my time learning more about brewers in the area, I’ve met quite a few with pretty impressive education curricula. It’s all about passion, my friends! By the time the 1990s rolled around, Brenden had started home brewing and reading more about the craft. He then realized how big craft beer really was. On top of that, he became increasingly bored of his office job. He got his first brewery job at the then-Monterey Brewing Co. located in SF’s Hunters Point neighborhood. Shortly after, he enrolled in the American Brewers Guild program and did an apprenticeship at Tabernash Brewing Co. (merged with Left Hand Brewing) in Colorado. Right around the same time, Brenden (and a business partner) started a contract brewing company called Reccow Brewing. He had dreams of opening a brewpub in the San Francisco area and went to Bavaria, Germany to work as a journeyman and potentially buy equipment for his new business venture. Things didn’t quite pan out as he had planned and Reccow Brewing closed its doors in 2000. Brenden made his way back to the United States and worked for Broken Drum Brewery (now State Room Brewery) in San Rafael, CA.

And here we are in 2002. ThirstyBear Brewing Owner and Brewer Ron Silberstein and Brenden cross paths. Ron is on his way to open up Admiral Maltings on Alameda Island with his business partners and needs a new brewer to take over at ThirstyBear. The brewery had been open since 1996. Ron had lived in Spain for a while and wanted to open a brewpub there. Things didn’t work out in Spain so he came back to the motherland and opened up ThirstyBear. Brenden said the food is now not as Spanish as it once was as they have had to adapt their offering to the demand. In 2007, ThirstyBear became Certified Organic, which means they have to work with vendors who offer organic ingredients. ThirstyBear is a fairly large brewery that boasts a 15-barrel brewing system with a bright tank (for golden, refreshing beer that is produced in large quantities and ages well) and another tank (for approachable amber ales, altbier, etc.). They produce roughly 1,100 beer barrels a year.

Since we are talking tanks and barrels, we may as well start talking beer. ThirstyBear offers 2 cask ales and 9 CO2/Nitro options. Brenden always tries to have their two best-sellers Howard St. IPA and Panda Bear Light Golden Ale, something black, something on nitro, some barrel-aged beer and a Hay IPA on tap at all times. “Always gotta have a hazy,” Brenden said. “They look at the board and say ‘where is the hazy?’ If that’s what they want we’ve got to give it to them.” As far as what I got to try, everything was pretty tasty. I have a slight preference for Panda Bear and Pershing’s Rye Porter on nitro. Make sure to check out the attached photograph for the full lineup. Oh and Brenden tries to come up with a new beer as often as once or twice a month so we never get bored of their tap list. Nice job!

I was pretty impressed with the fact that they also have two cask options. “You have to capture the fermenting beer at the right time,” Brenden said. “[We put on cask] anything that would benefit from being on cask.” While I tend to like heavier beer on cask, Brenden said his regulars from England like it when he features some lighter brews. “We want to expose people to different options and ways to enjoy beer,” Brenden said. “The traditional, almost organic method allows for the beer to shine without killing the aroma. Also, Ron likes it so we do it.”

I should also mention that ThirstyBear is home to a full bar for those weirdos who don’t like beer. Ha! Other than that, I love their food. Spanish inspired. Could be more Spanish for my taste, but I’m sure I must have an unusual palate being European and all… Brenden said they had to Americanize their menu a lot partially due to the fact that 1. they proud themselves in serving food made with local produce (and that Spanish ingredients can’t always be found locally) and that 2. ThirstyBear is a large brewpub and people didn’t always understand the marrying of Spanish food with craft beer. “Now it’s not so heavily Spanish,” Brenden said. “It’s more user friendly to accommodate the customers.”

What’s the future looking like? Bright! One of the main problems businesses face in San Francisco is increasing rent amounts. ThirstyBear doesn’t need to worry. Ron and some business partners purchased the building as part of a different business venture. Smart! ThirstyBear can sit back, relax, quench its thirst and keep producing great brews! Cheers! 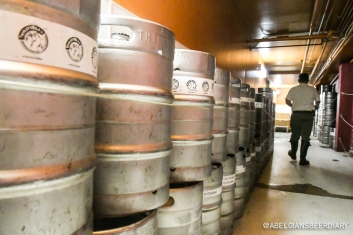 🇺🇸 Coming to you with a little something from Amarillo, TX. I stopped by @pondaseta where I got a flight of some of their brews and a couple 4-packs to-go. From left to right: 1. Sunrise Amber 2. Red Beard Pils 3. The Fast & The Hazy NEIPA 4. I-40 IPA. Absolutely delicious brews! Cheers!
🇺🇸 Quick stop at @elpasobrewingco the other day where I got a delicious flight of some of their brews: (from left to right) 1. El Jefe de Hefes 2. Lagartos Irish Red 3. Limonada Sweet Lager with Lemon 🍋 and Lime Juice 4. Thunderbird Black Lager. Boy was that Limonada sweet… but surprisingly good! Cheers! 🍻
🇺🇸 Got myself this Belgian Wit at @spotteddogbrewery in Mesilla, NM yesterday. Good brew and awesome chicken wings! They were out of my size in the shirts otherwise I’d have gotten one. Cheers!
🇺🇸 Texas treated well, you guys! I found this super cool little local joint in Alpine, TX. You know, the kind of place where the locals hang out. It’s called @harrystinaja. I had a few brews (not all craft but Texan nonetheless). This one is from @fcbrewing and is called Local Buzz 🐝 Honey-Rye Golden Ale. Nice way to end a long day of driving! Cheers!
🇺🇸 Brew with a view at Santa Elena Canyon at @bigbendnps! One of the park stores sells craft beer so I couldn’t resist. I grabbed a bottle of this Shiner Light Blonde from @shinerbeer (Spoetzl Brewery). Perfect for this 110-degree weather! Cheers!
🇺🇸 I’m driving all the way from Amarillo to Amistad, TX today so I thought I’d stop for a quick one in Lubbock. So happy I did! @twodocsbrewing is friggin legit. I’m having their Hayes-E Baby NEIPA. Kind of on the dry side but also pretty floral and citrusy. Very nice brew! Cheers!