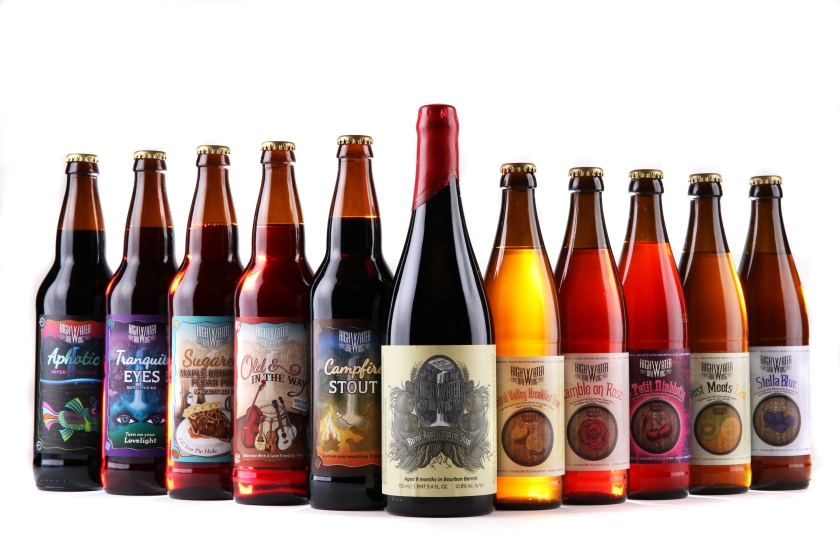 Confession #1: I’ve been REALLY busy and haven’t had time to post in over two weeks. Apologies for that!

Confession #2: I’ve never actually been to High Water Brewing (but I’ve tried quite a few of their brews, and they are delicious!)

Now that we’ve got that out of the way, I want to introduce you to the team. Steve Altimari is the president and brewer. You’ll get to know him pretty well as he answered the questions below (yeah, keep reading). Barri Altimari is the kitchen guru and company flavorologist (not sure that’s actually a word, but that’s a pretty cool title if you ask me!). They also have a partner located in Chico who serves as the board secretary, Kevin Sweeney. Now that I know all this stuff about High Water, it’s high time I pay them a visit! I’m planning a Central Valley brewery trip in the next couple of months to remedy the problem. I know what you are thinking. The Central Valley is just a bunch of dairy farms and warehouses. Maybe so, but they also have some of the coolest and hippest breweries in the state!

Hi Steve. Tell us about yourself!

My initial exposure to craft beer was after a long mountain bike ride that ended at a gas station with an impressive beer selection.  I had an Anchor Liberty Ale and had the epiphany how good beer could taste. I was now searching high and low for new beer styles and flavors. I was now hooked and started home brewing with some friends at work. Eventually we had a steady stream of friends hanging out at our house drinking my creations  and eating great culinary creations that Barri was crafting in our kitchen. We essentially ended up with a home pub. My hobby was turning into a part-time job!  I continued to expand my home brewery until one day I made the decision that the 9 to 5 of the High Tech world was severely overrated. I left the employed world and attended the American Brewers Guild brewing school in Davis and graduated in 1995. We then proceeded to purchase the El Dorado Brewing Company brewpub in Stockton. We renamed it to Valley Brewing Company and operated it for 2 years. We sold the pub in late 1997 but I remained on as head brewer until 2010 when the vision to start High Water Brewing became a reality.

How did High Water get started?

We started High Water in the summer of 2010 by incorporating and getting our distribution and business licenses. We partnered with Drakes Brewing in San Leandro and set up a warehouse and office next door to the brewery. We purchased four 30 BBL fermenters and installed them in Drakes brewery, we also purchased a walk in cooler, forklift and a couple delivery vans and started delivering beer in Spring of 2011.

We self-distributed from Monterey Bay to Redding and from the Bay Area to the Central Valley. Our initial focus was hoppy beers, imperial porters and a few barrel-aged beers. In 2012 we introduced Campfire Stout and the business really began to grow. Combining the flavors of a s’more with a delicious stout was an amazing idea that turned into our flagship beer. We began shipping beer to overseas to several different countries as well as all across California. We hired several Craft Beer Distributors throughout California over the next few years as well as adding distribution in 19 states across the US.  As we grew so did Drakes Brewing, our one year stay turned into two years. We are deeply indebted to John Martin and the entire Drakes family for helping us get our business up and running. In 2013 we began transitioning our production to Hermitage Brewing in San Jose. We are still producing a large amount of our beer under contract there and will continue to do so in the future. We also produce beers at Morgan Territory in Tracy, CA, Uncommon Brewers in Santa Cruz, CA and E.J. Phair Brewing in Pittsburg, CA.

Eventually in late 2017 we started envisioning the reality of having our own taproom and small production brewery.  Shipping beer around the world is fun but it lacks the face to face interaction that makes beer such a wonderful product.  Getting back to our roots in 2018 we purchased a 20,000 sqft warehouse at 927 Industrial Way in Lodi, Ca.  We built a taproom, Beer Garden and in house Kitchen.  We have a small production area for fermentation packaging and barrel aging. We just opened the doors to the taproom in July 2019 with our formal Grand Opening and ribbon cutting mid-September. We have approximately 20 of our beers on tap, we will also be bringing in guest beers from time to time to round out our selection. We offer an array of appetizers, pizzas, salads and sandwiches.  Our dessert line of course includes the infamous house s’more.The long term plans are to produce our IPA’s and other specialty stainless and barrel aged products in house while continuing the source our high volume production beers in contracts at other breweries.  We will be brewing our recipes at local breweries and bringing the cooled wort back to the Lodi brewery to ferment and package the beer onsite.

Any plans for the future at High Water?

Long-term plans are to re-purpose the back of the building into banquet/meeting room and kitchen as well as add the hot side of the brewery wort production and expanded barrel aging areas. We will also be able to accommodate the expansion of the distillation and winery side. We will be opening the back half of the property for larger scale events, car shows, concerts etc. as well.

We are leasing out a majority of the building to a wine storage facility. We are also in the process of finishing construction on a portion of the building which will be leased to Delta Artisan Winery and Distillery scheduled to be open in October of this year.

How do you go about creating beer recipes?

Most of my baseline brewing recipes came from the 1000 plus beers that I brewed during the early part of my career. The process of how we create new beers starts usually with Barri developing and idea for a new flavor combination or concept for a beer.  We work together on ingredients and translating the vision into a recipe that is compatible with the brewing process.  Once we have the recipe we usually go directly to a full size production batch of 30 to 50 BBL’s and move the beer directly into production. We work closely with the brewery on the initial batches and make any minor tweaks as the beer progresses.

We offer a full line of barrel aged sours which are initially fermented in stainless steel for around 10 days before being transferred into used wine barrels.  The beer continues to ferment and sour in the barrels for 8 to 9 months. We then add fresh fruit or puree as well as spices and our unique flavors to the barrels where the beer ages for another 3 to 4 months. After the one year process the barrels are sampled, blended and packaged. We call this line of beers our “Calambic Series”  Paying homage to the Belgian sour masters who inspired me early in my career. I will be expanding our in-house styles to include local grapes as well as local fruit with a few newer strains of yeast to produce some lower alcohol beers which should pair well with our hot summers and excellent in-house food dishes.

High Water comes from a loose Italian translation of our last name Altimari. Essentially Alta meaning High and Mare meaning Seas or Water. Our tagline best summarizes our approach to beer, food and life… “Unique Flavors for the Curious Palate.”

🇺🇸 Today I’m featuring a little something from @greenmountainbeer by the name of Belgian Lemongrass Blonde Ale 🍋 The lemon is a nice addition to a classic style. Cheers!
🇺🇸 Say hi to @heather_featherr20, beertender extraordinaire at @coalmineavebrewing! Heather, thanks for the Pilsey Pilsner! It was much appreciated and much needed 😉 Cheers!
🇺🇸 Time to feature some home brewing! My friend Josh (who is not on IG) and I brewed this C.R.E.A.M. - Can Really Electrify A Mango 🥭 back in January. I still have a few bottles left, but they are going fast. I’m pretty pleased with the result. I would maybe dial the mango down a tad next time. I thought my light bulb glass from @ipa would pair well with this “electrifying” brew. You can check out the article by clicking the link in my bio. Oh and special thanks to Manuel at @coalmineavebrewing for providing the flaked corn without which it wouldn’t have been a cream ale!
🇺🇸 Say hi to Jeremiah, beertender extraordinaire at @coalmineavebrewing! Oh and also, happy National Beer Day/Colorado Pint Day! I’m celebrating with a pint of Baca-Zacca IPA. What are you guys up to? Cheers!
🇺🇸 I was on a mission to visit some of Fort Collins’ amazing breweries that day. It was sometime in November of 2019. (Yeah, I know I’m still a little behind on posting). I ended the night at @purposebrewing. What a treat! I got a flight to sample some of their brews. From left to right: 1. Serenity Meow 2. Misty Shadows 3. Smoeltrekker #027 4. G’Day, Mate! Now I’m going to be completely honest, I can’t really comment on the individual brews. It’s been too long. But I loved the experience. Cheers!
🇺🇸 Say hi to @tammykaymak! Not a huge Harry Potter fan BUT this Muggle Nutter Pastry Stout from @coalmineavebrewing is delish! 50 lbs of Nutter Butter bars went into the making of this brew along with some extra peanut butter for good measure. Cheers!