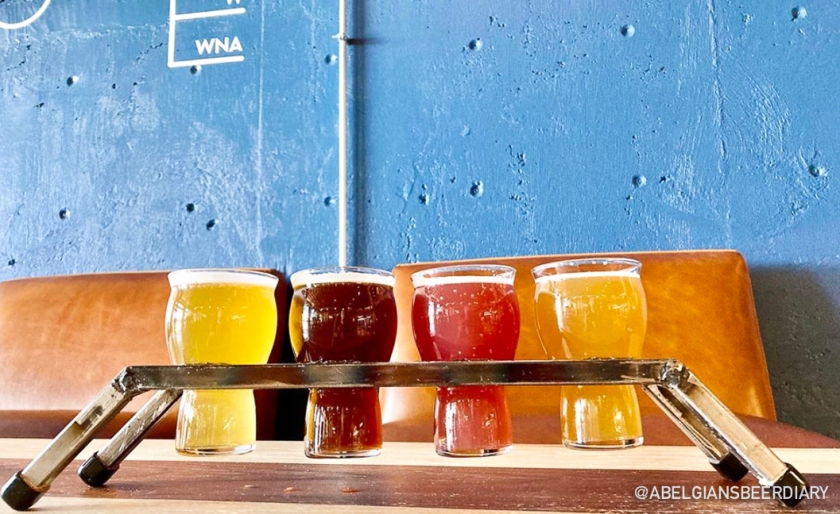 Barquentine Brewing. It’s really the name that got me there. It sounded French, and I was longing for a good Belgian-style beer. To be frank, I didn’t do much research before going, but it turns out I was right at least on one account: They have good Belgian-style brews! As for the name, we’ll get back to that later (but hint hint, it’s French but used in English and the Belgian inspiration is real).

They opened their doors right before Covid (yikes!), and I’m happy to say I was among one of the first people to visit once they opened back up (in a limited capacity). Having moved here recently, I didn’t know they were so new since everything is still new to me anyway. I parked my car and found myself in front of a pretty neat market-style food court called Edgewater Public Market. I love the concept. Inside the market, you’ll find food, art and bar. The brewery is located on the west side of the market. I was all set! (Oh and did I mention the market is walking distance from Sloans Lake?)

The current health situation didn’t allow me to meet with co-owner/ head brewer Kyle Knudson in person, but Kyle was kind enough to share his thoughts and experience via email.

Tell us about the team. How did you guys get involved in craft beer?

Barquentine is a small family-run brewery. My dad Ed primarily runs the accounting and operations side of the business. My two brothers, Kellen and Korben, aid in the report monitoring and consult in decision-making. I make the beer and my wife runs social media and is the creative genius behind our high-budget beer release videos. Our taproom manager Brad came on early in planning and is an invaluable member of our crew. Without his expertise in moving beer, there is really no point in brewing it! We have a very welcoming staff of absolutely experienced and knowledgable beer geeks.

I have been heavily involved in craft beer since I learned of its existence in college. I homebrewed excessively in a 400 sq-foot apartment, cellared rare beers, and helped grow a homebrew club in Brooklyn, NYC where we would push each other to study and compete in beer. I’ve sponged up brewing experience from two breweries before branching out on my own.

When and how did Barquentine get started?

The idea for running a production brewery goes back about 9 or 10 years, albeit the goals were far more unrealistic in those days. The plan became more obtainable when we removed the packaging portion and focused on constructing a comfortable tasting room dedicated to quality beer, education, and customer experience. We locked in the timeline during a trip to Belgium in 2015, sipping beers outside the café at the Westvleteren Brewery in the Trappist Abbey of St. Sixtus.

How do you go about creating recipes?

The most successful recipe development occurs with beer in hand. I’m regularly deconstructing vintages of bottles to arrive at how the rich layer of flavors can be used to inspire innovative homage. I jot down everything. Each day continues to be a school day so it is important to work on the base education to understand the rules of process and flavor balance. I listen to the experience and ideas of others then push to explore a unique voice.

I like to think of what would taste good at its peak, and then work backwards. The richest esters and phenols take a while to mature so time is a very important ingredient often left out of the recipe. Often you can be rewarded if you learn from traditional methods and then allow yourself to veer away from their recipes. Such has been the case with Copperclad, our copper ale brewed with our house saison yeast, a touch of roasted malt with Japanese Sorachi Ace hops. It pops with licorice, cherry, and lemongrass and has the illusion of a sweet mouthfeel that finishes quite dry. The flavors continue to develop and meld as time rewards it.

Any plans for the future at Barquentine?

We have always had a communal taproom in mind and still feel strongly that a tight group of family and friends, new and old, is what keeps a society healthy and strong. Obviously, we are all limited in that notion currently but when the time is right, we’ll soon embrace each other closer again and share a pint. Our goal for phase one was to build a space for draft beer. To make sure we could keep staff and pay bills, we moved quickly into to-go canning and were grateful the support was overwhelming. In the relative near future, we intend to get into some bottle conditioning and cellaring of some of our favorite beers. In addition, we have a few barrels going and will continue to expand on that project.

What do you think of the craft beer scene in the area and its expansion over the past few years?

I am constantly inspired by the creativity and quality of the beer scene that challenges the consumer and encourages palate growth. For the most part, there is a very strong fellowship of nearby breweries that embraces and supports the beer community. It is because of the foundation laid by the bountiful Colorado breweries that we are able to open with a niche offering in Belgian influence and enjoy a warm reception by guests that are open to education and conversation about their preferences. I think most customers would be giddy to learn how much ingredient swapping and process conversation takes place between fellow brewers.

A barquentine is a type of wooden sailing ship. We wanted to emphasize the bustling marketplace the brewery dwells in and tell the stories of mercantilism of wares on the busy docks in Antwerp, Belgium. The barquentines would sail in and the dockworkers would offload provisions to the shops, craftspeople and manufacturers, including brewing ingredients for the nearby monasteries.

How have you been coping with Covid-19?

We opened on February 29, two weeks before we shut down (oopsies). I filled every tank in preparation for the opening weeks. This left us with a surplus of product but at the time we didn’t have a packaging means to sell it. We had to panic buy a ton of cases of growlers while we waited for a can seamer and a long lead time of cans to arrive. Fortunately, we had a very supportive and thirsty community of friends, family, neighbors and beer drinkers that were understanding of our slap-on sticker labels. In addition, there are live and developing yeast flavors that matured into wonderful flavor. We’re ramping back up as people trickle back out and are working diligently with all of the businesses around us and the state to ensure we can continue to deliver a very quality glass of beer in the safest way possible. 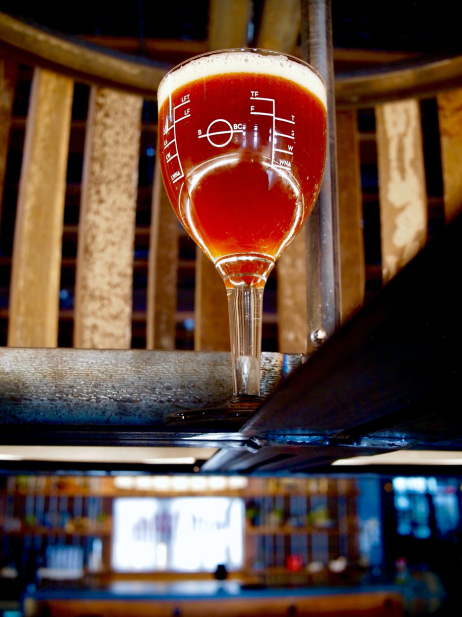