If you are a sour or Belgian kind of person, you may want to keep walking.

You will not find anything but ales at Steel Bonnet Brewing Co. The reason: the owner, Donald Cramb, is Scottish… and Scotland is kind of known for not getting into much anything but ales. According to the manager, Sam Peacock, Donald loves IPAs and always makes sure to keep one on the menu as well.

The place is pretty quaint, but it’s hard to mess up when the live band plays the Beatles all evening! Ha! I guess I lucked out. It’s small and intimate. Full of locals. They opened a little over 3 years ago and they are going strong with the support of the Scotts Valley, CA community. Nice job, guys!

I wanted to get a feel for what their beer was like so I got a flight. My favorite one was actually the one my partner ordered separately —a cream ale called Ginger Snap. Please scroll down to see the awesome picture I took of the flight (sic)! The first one on the left was actually brewed in collaboration with East Cliff Brewing Co. in Santa Cruz. East Cliff is specialized in casks so they have the cask version while Steel Bonnet has the keg version. Interesting collab. Pretty good beer if you ask me! 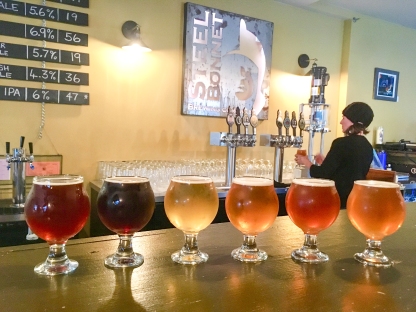 🇺🇸 Time to feature this Sud-Nord Saison by @umunhumbrewing! As all of you may know (or may not know), I was the president of that brewery for a short while before moving to Colorado. They will always have a special place in my heart. @laurarwinter, thank you for sending me this sample bottle! I thoroughly enjoyed it! Cheers!
🇺🇸 Dropped by @thegravitybrewing a little while ago and grabbed this Mendacious Belgian-style Golden Strong. 🍌 flavors, super smooth. Maybe almost too smooth for my own good. Ha! Santé!
🇺🇸 A couple brews from my recent-ish visit to @wonderlandbrewingco. 1. Let Them Drink Cake Stout 2. 7 Queens Honey Blonde. Both were pretty gravity and super flavorful. Smooth adult beverages we’ve got here! Cheers!
🇺🇸 Always a pleasure to make a pit stop in Frisco, CO to visit @outerrangebrewingco! I grabbed a 4-pack of this Steezy DDH IPA last time I went. Friggin’ awesome as usual. They seriously make some of the best IPAs in the country! That being said I also have a soft spot for the imperial stouts, but they had nothing to-go when I visited last. Cheers!
🇺🇸 As you may know I am the taproom manager at @mothertuckerbrewerylouisville. I wish we’d rename this ESB and call it Elizabeth the Second Beer (ESB). Whatever you think about monarchies there is no denying that the Queen has left her mark and was an example of class. Cheers to 70 years of reign!
🇺🇸 🎶 A little Lightnin’ Hopkins for this Lightnin’ Hopkiss DIPA from @locavorebeerworks. Can’t go wrong with either one! Ha! Or both at the same time… Cheers!