The answer is… hell yeah!

I paid a visit to Eight Bridges Brewing Co. and sat down with brewmaster/owner Justin Beardsley, 33. By now, you know how it goes, right? Justin started out as a home brewer and eventually decided his career in emergency services didn’t sound quite as exciting as having his own business. So one day, he went for it. Not that fast though. Justin did a bunch of research and got quite a bit of help from his dad who is a start-up consultant. It took him about 4 years between the moment he decided he wanted to explore a career in brewing and the opening of the brewery to fine-tune his craft, come up with a business plan and execute it. Eight Bridges Brewing was born on Feb. 8, 2014.

If you are from the Bay or live in it, you probably already understand the reference, but I’ll explain for those who don’t. There are eight toll bridges around the San Francisco Bay: the Golden Gate Bridge, the Bay Bridge, the San Mateo-Hayward Bridge, the Dumbarton Bridge, the Richmond-San Rafael Bridge, the Carquinez Bridge, the Antioch Bridge and the Benicia-Martinez Bridge. Counted them? That’s eight!(That’s a lot of toll money! Yikes!) Justin and his family originally thought of opening up a brewery in Dublin, CA, but things didn’t quite pan out with the city so they opted for Livermore, CA.

If you are reading this, you are probably wondering about their beer. Right? Yeah, I know… Well, I’m happy to report that their beer is on point and that there is a little for everyone. Justin really knows his craft and brews all kinds of beers from kettle sours to DIPAs. Although they have had a history of releasing beers almost every week, Justin said he is trying to cut that down a bit this year and make slightly bigger batches instead. For the record, they released right around 50 beers last year… Quite the achievement! He brews on a 10-barrel system that hasn’t quite reached its capacity yet and puts out about 2,000 barrels a year as of now, 75% of which is for distribution. The plan for expansion is to start canning by the end of the year, but Justin has his own opinion about that and wants to do it the right way.

“Mobile canners are not brewers,” he said. “They don’t always do what’s best for the beer.” Fair enough! So they are going to acquire their own equipment and do it themselves to preserve the integrity of the beer all the way to when you take that sip… “Quality is our number one thing,” Justin said. He is all about quality and authenticity and isn’t afraid to say that small breweries have to learn from the big guys in the industry. After all, they are the ones that spend the effort and money into the science behind the beer. “Beer is the perfect marriage of art and science,” he said.

Did I try any of Eight Bridges’ brews? Of course I did! Justin said there are four core brews: Golden Nektar Pislner, Twisted Red Ale, Hoppy Salvation IPA and O’Beardsley’s Sout. The rest of the tap list rotates frequently and I had the pleasure of trying some of them. I got my hands on the Twisted Red Ale, the Dairy Free Cream Ale Nitro With Coffee, the BOB Belgian Golden Strong Ale, the Resin Raptor DIPA, the Sour Saison and the O’Beardsley’s Stout. My faves: the stout and the DIPA. But I want to comment really quick on that Belgian Golden Strong Ale. It tasted and smelled a lot more like a hefeweizen to me, but I want to give Justin props for making his own blood orange caramel at home. That’s pretty awesome! Oh and did I mention he also made his own device to infuse the nitro into his beer? I guess his background (other than being a paramedic) in mechanical engineering really paid off!

Other than that, they are happy to be in Livermore and are not planning on moving or expanding to other cities for now. Whatever happens, Livermore will always remain their main space. Justin even said it’s more fun to remain small and local. Props to that!

Want to be part of their Mug Club? It’ll cost you $75 a year, but you get all sorts of perks from bigger pours and free beer on your birthday to special events. They tap out at 100 members a year and they have around 85 year-to-date. Gotta get there quick if you want your dedicated mug! 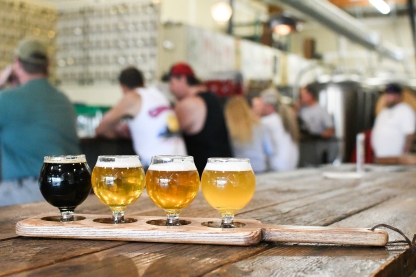 🇺🇸 We visited @two22brew with @wesleythedachshund this past weekend. He seemed to really like this Palisade Patio Peach Wheat Beer… and I did too. Ha. Cheers!
Oktoberfest at @locavorebeerworks? Yes please! I usually post beers separately, but I thought I’d throw a combo at you with all three of the beers I tried from this weekend’s releases. 1. Friend of the Devil Schwarzbier 2. Das Litre Bier Marzen (featuring Cindy) 3. Helles Yes! I attended yesterday and had so much fun playing the games and catching up with everyone. Ein Prosit!
🇺🇸 @locavorebeerworks has some of the best Belgian-style brews in town. And I’m not just saying that because I hang out there a lot. Belgian Tripels are arguably my favorite style of beer, and I get pretty picky. This one is a very good representation of the style. Nice banana and pear notes. Just a tad sweet (or a tad not dry enough) for my taste. Great brew! Cheers!
🇺🇸 I wore a @marblebrewery t-shirt yesterday so I thought I’d post this Double White Triple Berry today. A great summer Belgian-style wheat ale with amazing berry flavors. Cheers!
Meet Dylan aka @dp527! He just started working at @locavorebeerworks the same day they tapped Invincible Vince NEIPA. This brew is an ode to Vince Lombardi who passed away on Sept. 3 (same day they tapped the beer), 1970. It has a lovely dry finish. Great brew!
🇺🇸 Wesley aka @wesleythedachshund is making yet another appearance on the feed. This time we are featuring @blackprojectbeer’s Stargate 2020 Peach Sour 🍑 OMG that brewery is killer for sours! Cheers!