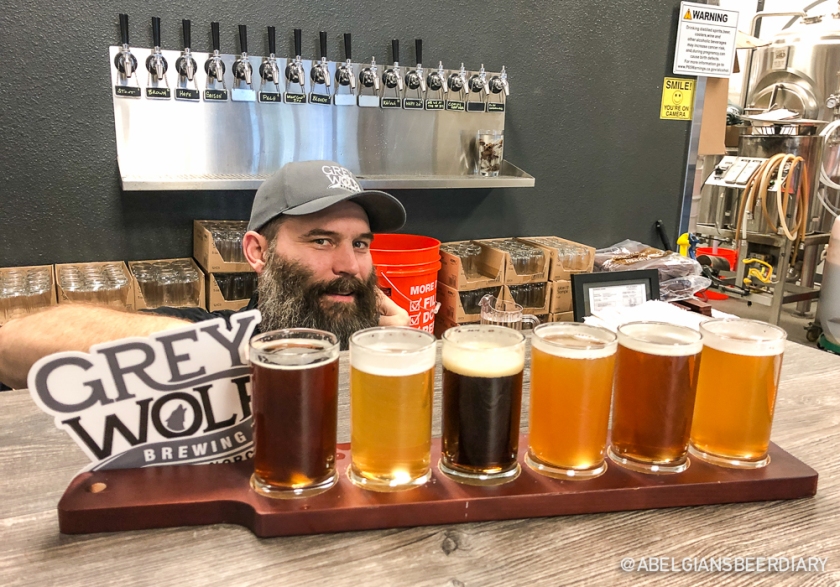 They were going to have their grand opening back in March but then the pandemic hit. Change of plans.

I visited GreyWolf Brewing Co. back at the end of February. They had been open for about two weeks and were ecstatic to finally be able to serve beer in their taproom. It took them quite some time to get all the required permits so their opening kept getting delayed. Two months later, they still haven’t had their grand-opening party but this time for a much different reason: the coronavirus pandemic. I met owner Chad Adams who gave me a quick rundown of how he got started and why. With all that’s happened since, we got a little sidetracked and just got around to exchanging emails about doing this Q&A this week.

I’ll tell you one thing: Next time you are in Norco, CA, pay Chad a visit. You won’t regret it.

Chad, you have the floor…

Tell us about the team

We are a family owned brewery and tasting room in Norco CA. As is the case with many professional brewers, I started as a home brewer. I started in 2011 and quickly realized that this was something I really enjoyed and as time went on was good at.

When and how did GreyWolf Brewing get started?

In October 2016 I was laid off from a company that I had been with for nine years, I had toying with the idea of writing my business plan, they lay off just gave me the kick in the shorts to get moving. In early 2018 I started looking for locations, found that small industrial/commercial spaces were rather difficult to find before they were leased out. In May of 2019, my wife saw a post on Facebook that a brewery that had been in the city of Norco for 7 years was shutting its doors and moving out of state; it was just what we needed. We signed the lease in July 2019 and opened for business February 8 of this year.

How do you go about creating recipes?

Most of the inspiration for my recipes start with a flavor I have in my head. I usually try to adhere relatively closely to “style,” so I check the “guidelines” for some points in which I can build upon. I usually try to use ingredients from the country that a style originates from; this is usually the easiest way to match up flavor profiles. My flagship beer is quickly becoming my Belgian Style Tripel, a beer I call Tartarus Warhammer. It was my first original recipe, and one that went through many changes over the years in an attempt to “improve” upon it… All changes failed to capture the magic, and the beer brewed today follows the same technique and basic ingredients of that original brew.

Any plans for the future at GreyWolf?

Eventually, roughly 4-5 years down the road, the plan is to expand to a larger space and brewhouse, as well as potentially add a restaurant. I am a bit of a foodie and love pairing my beers with different foods. Every expansion will have to meet the financial requirements of viability. If the numbers don’t work out, there is no reason to spend the time, effort, and money on a loser.

What do you think of the craft beer scene in the area and its expansion over the past few years?

The “I.E.” or Inland Empire of Riverside and San Bernardino Counties is a growing destination for craft beer in my opinion. There are a lot of breweries that are pushing the boundaries of quality. There are some really good beers coming out. I think part of it is the cost of living in Orange County. Many of the people who moved from OC brought with them their desire for delicious beer. With the growth of wine and spirits, market share is a limited commodity, we [the brewers] have had to step up our game to grow. GreyWolf is on a little bit of an island in the area. There are a couple breweries to our south in the city of Corona, but going north, there is a void. That’s where we pull most of our customers from —outside of the passionate craft beer drinkers that reside in Norco itself.

I have always loved wolves. They are majestic and beautiful creatures. The biggest reason why I chose to name my brewery was the “family” structure that wolf packs have. Similar to the family/community structure of the wolf pack, I wish to cultivate community and friendships with and for my customers and patrons.

How have you been coping with Covid-19?

Part of my business model was to start canning beer to-go two months after opening. The COVID-19 outbreak accelerated my timeline, as the shutdown happened five weeks after we had opened our doors. Because all the infrastructure was already in place (I had already acquired a can seamer and a small display refrigerator), all I had to do was source the blank cans. I had actually placed my first order with the supplier two days prior to the shut-down order (though the processing time was three to four weeks). I called up the supplier and was able to get a pallet of blank cans and was canning beer the next day. I actually did not miss any normal business days.

Follow your passion. We only get one shot at this life, and it all could end tomorrow. In the mean time, support your local businesses, and drink good beer.

The times have changed. Brewing with gloves on -photo courtesy of GreyWolf Brewing Co.