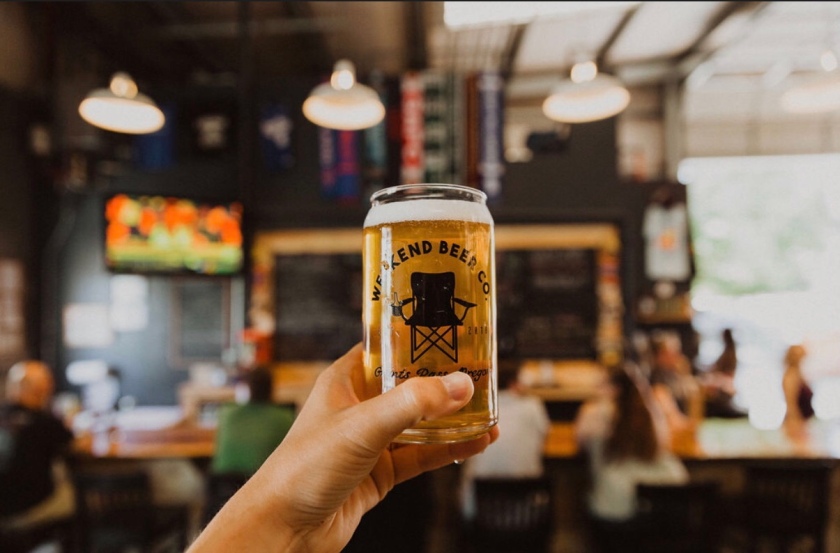 I visited Weekend Beer Company in Grants Pass, OR about a year and a half ago (way prior to the Covid madness) and had a lovely time.

Things have really changed all over the world since, but I have fond memories of the relaxed atmosphere at Weekend. I will let co-owner Ashley Crews take the floor and introduce the veteran-owned brewery to all of you.

Brandon and I knew we would open a brewery someday. We had talked about it for several years. Years ago, we were casually chatting about what the brewery would be and the vibe. We wanted the name and image of the brewery to encompass a laid-back feeling and convey enjoying life and doing what you love with your family and friends. We also believe that beer is best enjoyed in these times. Brandon had read something that he thought really embodied what we were looking to create. He then read me the quote from James A. Murphy. The quote reads, “It’s not that we spend five days looking forward to just two. It’s that most people do what they enjoy most on those two days. Imagine living a life where every day are your Saturdays and Sundays. Make every day your weekend. Make everyday a play-day…” We turned and looked at each other and it just clicked!

How did the Weekend Beer Company get started?

Weekend is owned by two couples: Brandon & Ashley and Kelsey & Troy. Brandon is our brewer. He studied the craft of brewing in England 2011 and has been brewing professionally since 2013. He started at Rock Bottom in downtown Portland, OR.

Kelsey and Brandon have been close friends since 6th grade. The three of us (Ashley, Brandon and Kelsey) went to school together through high school. Kelsey and Troy served in the Army for 10 years each (where they met at West Point) and they decided to move back to Grants Pass. Kelsey and Troy reached out to us. We started talking about wanting to open a brewery and the concept of what we wanted it to be. We quickly realized we had the exact same vision: We wanted to give back to this community that shaped who we are. We wanted to share with people how the craft-beer industry can bring people together. We wanted a comfortable, family-friendly feel where everyone feels welcome. We all bring something different to the table, which is what makes us such a strong team; Brandon with brewing, Ashley with marketing and events, Kelsey heading up the taproom and finance, and Troy with operational needs. We all play our part to reach the same goal.

What do you think about the Oregon/Grants Pass craft beer scene?

We have 7 breweries now in Grants Pass. They are all very different in the way they feel, the people they attract, and no two are the same. We are so thankful for that!

All but one of the 7 breweries in town have opened within the last 10 years. The local craft-beer scene is definitely growing and we’re excited for the possibility of southern Oregon getting a reputation in the craft beer scene.

Any interesting plans for the future?

We are SO EXCITED to build our new brewery up at the top of town. We are building from the ground up and it will be what we need to succeed. The initial build will be a 4,800 square-foot brewery and taproom with about twice that in outdoor space for our patrons. Being on 1.5 acres we will have plenty of room to build a separate larger brewing facility as we grow in the future. We can’t wait for this to get underway. Ground-breaking is set for this week! (beginning of September) You can expect food trucks, event space, outdoor seating, fire pit, and lawn games. Estimated (hopeful) completion date is set for the beginning of 2021.

Tell us about your beer. How do you go about creating recipes?

We have 4 core brews on tap at this time. Slow Your Row Kölsch, American Wheat, Wochenende Alt (German Amber Ale), and Weekend IPA. Due to popular demand, we are adding the Wheeler Porter to the regular lineup in the next few weeks. We have about 4-6 rotating taps at all times. These include a sour, usually a pale or IPA, and whatever the season calls for! We have a few that make a comeback each season including the Topless Rafter Blonde, fRYEday Night Lights (an Imperial Rye IPA), the Lost Pumpkin, and Poco Caliente to name a few. We focus on quality, approachable beers.

Our real focus is to live your weekend every day of the week. That’s what it’s about, doing what you love. And we love sharing our passion for craft beer! We are so thankful to our community for the support and the ability to do what we enjoy.

Paddled pub- We partnered with the Paddled Pub this summer For the first time! Check out their website for more info, the video is awesome! Basically you choose your favorite Weekend brews to drink on a raft that you relax on while someone else rows…heaven!
Staff- We have three beer tenders now, Malia, Sierra and Darcy. Darcy has been with us for a while as an intern, and more recently becoming an official assistant brewer. She started out volunteering her time to learn about the brewing process. She is enrolled in the same school Brandon went to in England, but due to Covid she has to do it online. While that is a bummer in some ways, we are thrilled that she gets to stay and help us out both in the brewery and taproom!

Events and fundraisers- We love to have a good time! It’s even better when that good time benefits someone else!

We regularly host beer and yoga and other events that showcase our local talent. We held a wreath-making class, and this week we will have a pottery class and next month, our first brewer’s dinner! (This was written back in September, and the brewer’s dinner is in October). Some of our fundraisers include: The kegerator drawing and Hold the Line brew, benefitting the Wildland Firefighter Foundation (this year), last year’s Wildland Firefighter Fundraiser night and Hold the Line Red IPA collaboration with a Foundation recipient, RED (Remember Everyone Deployed) Friday, tree-tag donations for our deployed soldiers.
More photos from Weekend Beer Company: 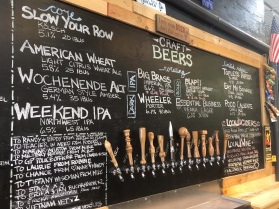 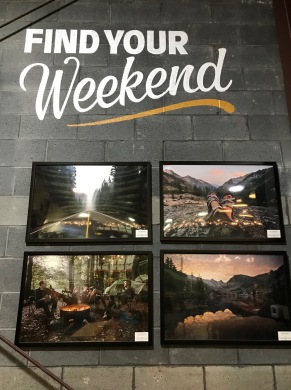